Hello, my name is Tatiana, and I’m a Cake-a-holic. I know I’m not alone in this great Miami metropolis and I’m on a mission to find other Cake-a-holics just like me!

I’ve created a “one-stop-shop” for like-minded Sweet Tooth’s like myself, where you can indulge yourselves in everything sweet… especially Cakes!

Here at Cake-a-holics, we pride ourselves in creating show-stopping, custom designed cakes that are sure to wow your guests. Your imagination is the limit! We don’t just enjoy our cakes, we’re addicted! Let us help make your event memorable.

If you’ve officially become a Cake-a-holic after tasting one of my sweet treats, be sure to send me a message, and let us know how you feel or post pictures… after all, the first step is admitting. Enjoy!

After working as a Special Events Manager for 7+ years, Tatiana decided to take her event planning experience and love of art to a whole new level. As a self proclaimed “cake-a-holic” with an artistically inclined family (mother is a poet, brother is a visual artist, grandmother was an acrobat, sister is in set design, stepdad and herself are musicians, and uncle is an off-broadway star), the art of cake baking and design was a natural fit. Cake-a-holics was established for the cake lover in us all.

After teaching herself various cake baking and design techniques, Tatiana felt it was time to broaden her culinary horizons and attended The French Culinary Institute in New York City. She has now brought her unique culinary style and flavor to South Florida for all to enjoy.

Babi’s Famous Flan (guaranteed to be the best flan you’ve ever tasted!)
Mint Chocolate Torte – made with real milk chocolate and Andes Mints!
Cake shots! - Moist cake and filling of your choice, dipped in rich dark, milk, or white chocolate. A wonderful and unique gift for the cake lover in your life!

Have a question, comment, or request for a custom cake? I would love to hear from you! Please fill out the form below, and I will reply shortly. 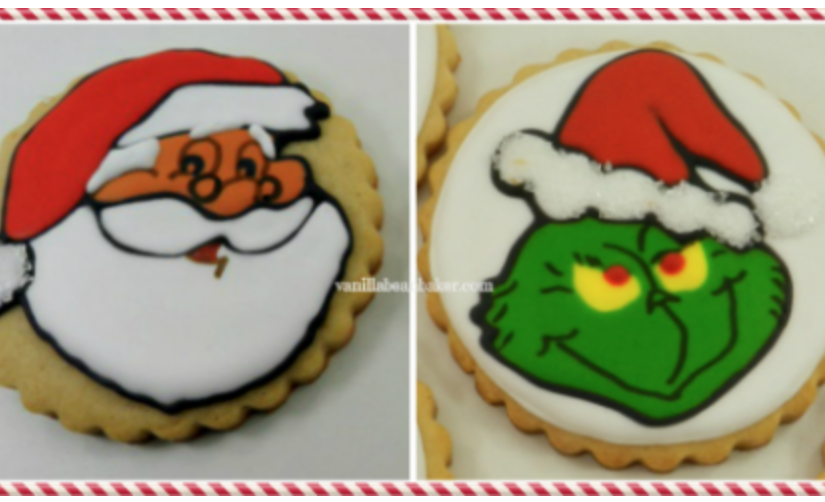 Today I’m sharing with you how I made two of the more popular sellers at the Artisan’s show.  Children and adults alike had special smiles for these two decorated images. 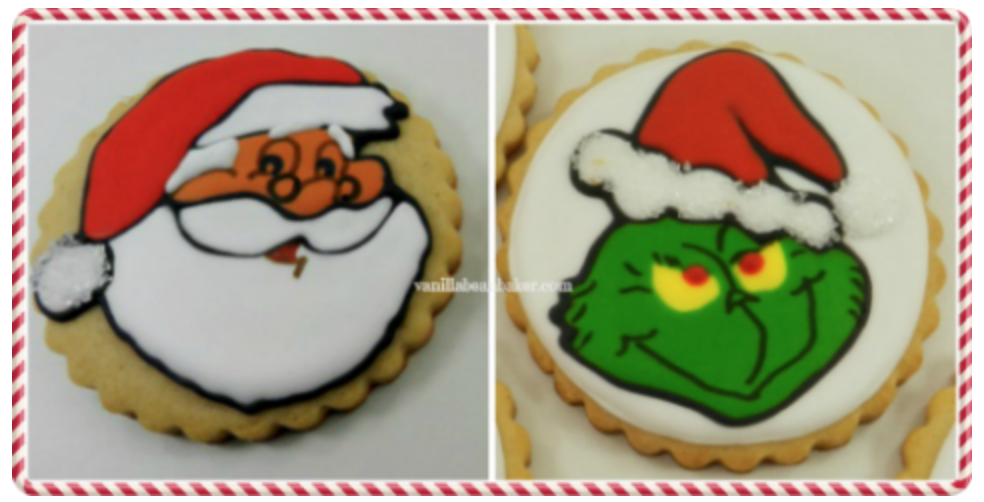 Before I get into the tutorial, I want to thank Thyjuan of Inspirations by Thyjuan for the excellent Grinch cookie that she did freehand and posted on New Year’s Eve 2010.  It was her cookies that inspired me to do the Grinch this year, but with the help of my Kopykake.

So, once I had piped and flooded the cookies in white and sized my Grinch image for my cookies, I used an edible marker to trace it and then outlined the image with black piping icing.

Next I used yellow flood icing to do the eyes and then added a dot of red piping icing to finish them off.

The hats were then flooded in red, the hat rims in white and the faces in dark green flood icing.  the cookies were then left to dry completely overnight.

Once dry, a black edible marker was used to draw in the face detail.  White sanding sugar was shaken over small amount of clear corn syrup that had been brushed over the hat rim.

For the Santas I used my Kopykake to trace the image with edible marker.  Black piping icing was then applied over the trace lines.

Red flood icing was used to fill in the hats.

Next I flooded the faces with tan flood icing.

White flood icing was used to fill in the remainder of the hats, the eyebrows and sideburns, the moustaches and the beards.  Again, the cookies were left to dry overnight before using black, red and brown edible markers to complete the facial and mouth details.  White sanding sugar was applied to the pom-poms of the hats.